STAG…Coasteering is a perfect addition a fantastic stag adventure weekend in Pembrokeshire. Suitable for all abilities, we’ll introduce your group of lads to a wet & wild adventure. Take yourself to the edge with Cliff Jumping, test your bottle in the Tumble Dryer! #GoBigorGoHome

Your family day out could include exploring caves at low tide, scramble climbing & traversing your way along the North Pembrokeshire rocky shore, cliff jumping from zero to 35ft (all jumps are optional), go with the flow playing in water features including ‘the toilet flush’ and ‘washing machine’.

Planning a stag weekend? Throw them off a cliff, Coasteering in Pembrokeshire Wales...

Stags weekend - dressing as a ballerina is optional. It's all about looking good out there folks...

Even the best man goes Coasteering in fancy dress sometimes! Test out your Tom Daley diving...

There's that tutu again! All our stag weekend adventures are tailored to suit all abilities...

Why should the boys have all the fun?! Hen & Stag sharing a Hag party weekend in Wales...

Hen party weekends in Pembrokeshire. All coasteering adventures finish with cliff jumping into...

Stag party weekend in Wales. Get together for an unforgettable adventure Coasteering in Pembrokeshire...

We've seen some awesome costumes worn by stags. Can you beat Tony the Coasteering tiger?...

Pembrokeshire's coastline has some fantastic cliff jumps. It's not all about height, low level...

Ahhhh the pink tutu. Share an unforgettable adventure with your stag party in Pembrokeshire...

If the sea's flat - there's a plethora of jumps, scrambles and caves. Dressing as a cow -...

Coasteering in Wales' Natural Waterpark. Test your nerve in the Tumble Dryer - the...

8. Stag dressed as a penguin Coasteering

Our Coasteering Guides carry a waterproof camera with them. Capturing photos & videos as the...

9. Steve Backshall and the boys Coasteering in Wales

Pause for a pose on Abereiddy headland. Before taking on the next cliff jump - it's a bigun!...

What is Coasteering?
Pembrokeshire Coasteering is an outdoor activity exploring the coast at sea level. All Coasteering sessions with Celtic Quest are tailored to suit your groups expectations and abilities and can include cliff jumping, scramble climbing, adventure swimming, rock hopping and more.
Where can we do Coasteering?
We meet you at the beach.
Map & directions to Abereiddy bay.
We’ll bring all the adventure kit with us. After an introduction your group will get changed, listen to a safety brief, then you’re off.
When can I go Coasteering and how long does it last?
Celtic Quest offer Coasteering adventures Mar-Oct and some sessions through the winter.
Summer Adventures run 9.30am-12.30am & 2pm-5pm daily (March-October) Winter Adventures start at 10am or 1pm daily (November-February). Winter coasteering is subject to staff availability, sea/weather conditions and any pandemic restrictions.
Meeting you at the beach gives us more time to spend exploring the coast. We’re normally in the water for approx 2 hours. Add to that getting changed before and after…it’s a good half day activity.
How much does Coasteering cost?
Standard price is £55.00 per person, group discounts are available.
BOOK MY ADVENTURE
What's the minimum age?
Minimum age for our standard sessions is 8 years. WATERSPROUTS sessions are tailored for younger children age 5-8 years. We have found that younger children can tire quicker and tend to get a bit chilly out there. If you have children under 8 years old, please get in touch to discuss your requirements.
What do we need to bring?
You’ll need swimwear, a towel, an old pair of shorts and a pair of old trainers. We provide the rest, including – winter steamer wetsuits, buoyancy aids, helmets, neoprene wetsuit gloves, hoods and socks.
What if I can't swim?
No problem, your wetsuit and buoyancy aid are super floaty, so you just go with the flow. Your Guide will be close at hand throughout the activity and all elements are optional.
Will I get cold and what if it's raining?
Your first dip will be refreshing, after that the wetsuits get to work and will keep you toasty warm throughout your adventure. Rain or shine – we can go Coasteering, as you’ll be getting very wet anyway. 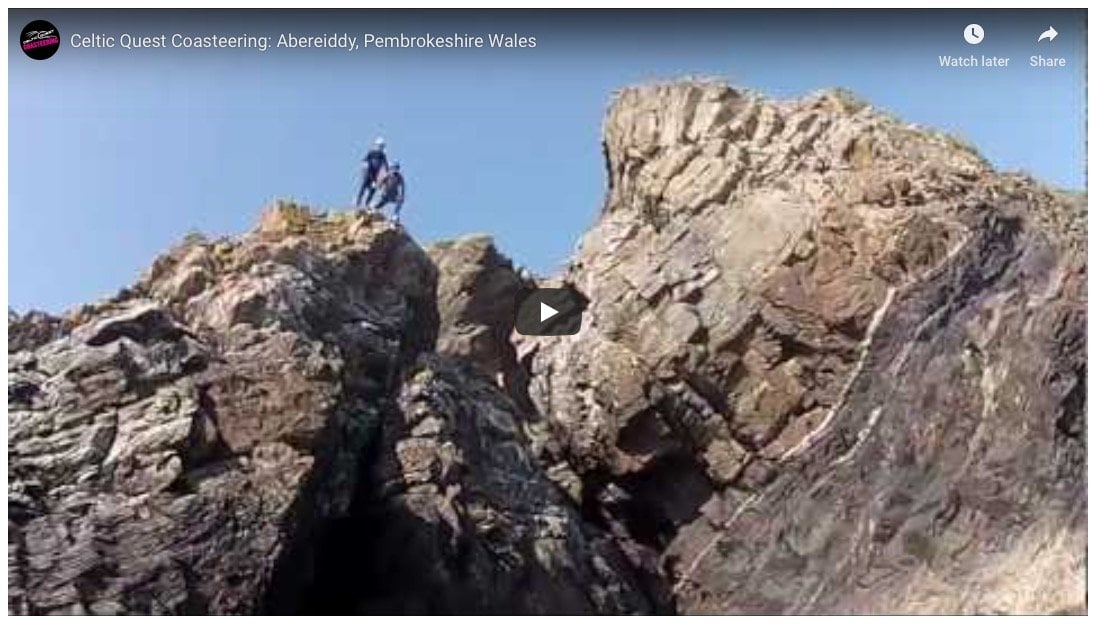 We turned up on a windy, dull afternoon, concerned what we'd let ourselves in for. The waves were crashing in and the sea looked cold. The sky threatened rain. We met Cleo and Gabe who were full of enthusiasm as they handed out the kit. We needn't have worried about the cold as the wetsuits were thick and warm, plus we were given wet-socks, skull-cap and gloves, and helmets and buoyancy aids to keep us safe. Once dressed in all the gear we were led into the waves, onto the rocks where we proceeded to follow Cleo and Gabe, encouraged to jump, dive, bomb, somersault and generally throw ourselves around. It was great fun to be thrown about by the waves, trying to climb out of the water, climb ever-higher and jump back in again.
Finishing in the breath-taking Blue Lagoon was spectacular and everyone was encouraged to jump higher and higher. Everyone pushed themselves, but no-one was forced into a jump they didn't want to do. I can't recommend this experience enough and would love to try again

Mich and Gerry were brilliant we had a great time, equipment seemed better than others around, water wasn't cold, great fun and rush, highly recommend.


"Awesome adrenaline-filled adventure for my hen do!"

Celtic Quest were awesome start to finish. I booked well in advance as wanting to coasteer on the bank holiday weekend was going to be something in demand and booking and communications with the CQ team were great all around. The activity was brilliant value for money. Gabe was a fantastic instructor - I find the sea quite scary due to personal experience but love rock climbing and adventuring so was really keen to try coasteering. He made everyone feel relaxed and we had a lot of fun with lots of interesting information about the wildlife and local area but feeling safe the entire time. I didn't fancy doing some of the higher cliff jumps the others did and he was encouraging but not pushy at all when I didn't jump as it was just a bit too exposed for me. Jumping in the Blue Lagoon at the end was awesome although once was enough for me this time! I'm glad I did it and I've definitely got the bug so will be back for more with other friends in future. Thanks for looking after us and ensuring we had a great time - this is a fantastic way to see the coast and was equal parts terrifying and exhilarating!

Our summer calendar is filling up quickly. If you are unable to find open availability please call the office 01348 837337, as we may be able to wriggle you in. We're terribly sorry if we cannot accommodate your party this summer but hope you'll pencil us in for next season!

Please be sure to read our cancellation terms, we operate a sliding scale refund policy. Cancellation for any reason including illness, infirmity or COVID19 related issues may result in zero refund.

Fab Feb offer!
Save 10% when booking this month for any coasteering adventure in 2023.
Use code FABFEB23

Booking Calendar
Close the Content Dock Do not show again