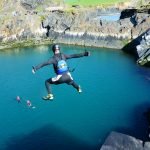 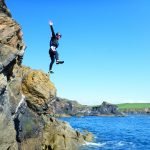 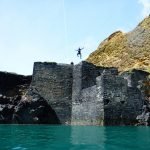 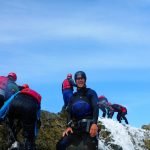 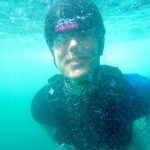 From an office in Holland to cliff jumping on the Pembrokeshire coast. After joining Celtic Quest Coasteering for an adventure back in Sept 2014, Nick was hooked and jumped at the chance to work full time with the team for the 2015 season.

What attracted you to this position?

I wanted to see if the outdoor life was for me. I had my eye on Wales, mainly due to the fact that I enjoyed my holiday in September last year. It was the best vacation trip I have ever had. The coasteering experience with Celtic Quest played a big role in that. When I saw the vacancy in April 2015, I thought: “Hey this is actually a good step towards the direction I wanted to go, so why not give it a shot?!” Although I have to admit that being called the “jumpy type” by a former colleague, and regularly seeing #lovemyjob on my Facebook newsfeed from the Celtic Quest guys, were strong clues I should seize the opportunity.

What were you doing before this?

I had an office job. I was working for an international economic consultancy in Rotterdam, predominantly working on energy policy related topics. Mainly for public clients in Europe, such as the European Commission and National governmental bodies. Although the topics where interesting, I felt I had little to no impact on the discourse. As if a certain connection was simply missing.

So, how is it going? How does it compare?

As you can imagine, it’s quite hard to compare. An office job versus a beach lifestyle. It took me a while to change gears and let go of ‘the consultant role’ in me. Also because there were only about two weeks between saying to my old boss “Hi, I have decided to quit my job” and actually being in Welsh waters.
Now I simply love being outdoors with the team, grateful and proud to call the Blue Lagoon my new “office” (although natural playground is probably a better fit). It’s fulfilling to see the smiles and hear the clients experience the thrill of the adventure. They each in their own way explore the limits of their beliefs, their potential and most often succeed by extending it. Especially when someone is new to such an environment, as with non-swimmers or nervous clients. It’s not hard to see the transformation take place when they suddenly realize it’s actually quite fun to go with the flow of the ocean swell and have a play in the various ‘wave-machines’ out there. Final verdict – no regrets, it’s a no-brainer.
A Flying Dutchman jumps into Wales was last modified: April 15th, 2021 by Cleopatra
PREV
NEXT